Five-Star Trails: Chattanooga: 40 Spectacular Hikes in and Around the Scenic City by Johnny Molloy

This collection of 40 five-star hiking trails in the Chattanooga area includes popular routes and hidden treasures. 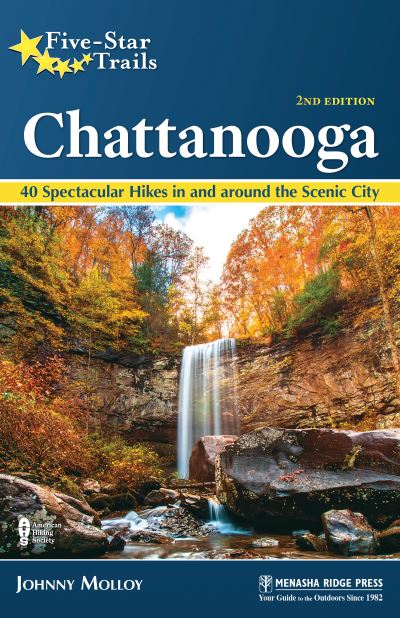 Discover the Best Hikes in Chattanooga, Tennessee Centered on the banks of the mighty Tennessee River, Chattanooga is flanked to the east by the lofty Southern Appalachian Mountains and to the west by the rugged Cumberland Plateau. So it is within easy reach of an incredible array of hiking destinations. Explore 40 of Chattanooga's best, five-star trails, divided into six distinct areas in and around the city. With the expert guidance of Tennessee author Johnny Molloy, you'll take a ramble through the backcountry of the Cohutta Wilderness, a trek to a natural bridge on the Cumberland Plateau, a history-rich stroll along a Civil War battlefield, or a quick escape on a greenway near your home. Book Features: Descriptions of 40 five-star hiking trails for all levels and interests GPS-based trail maps, elevation profiles, and detailed directions to trailheads Insight into the history, flora, and fauna of the routes Ratings for scenery, difficulty, trail condition, solitude, and accessibility for children Lace up, grab your pack, and hit the trail!

About the Author: Johnny Molloy is an outdoors writer based in Johnson City, Tennessee. Born in Memphis, he moved to Knoxville in 1980 to attend the University of Tennessee (UT). During his college years, he developed a love of the natural world that has since become the primary focus of his life. It all started on a backpacking foray into the Great Smoky Mountains National Park. That first trip was a disaster; nevertheless, Johnny discovered an affinity for the outdoors that would lead him to backpack and canoe-camp throughout the United States over the next three decades. Today, he averages nearly 200 nights out per year. After graduating from UT with a degree in economics, Johnny spent an ever-increasing amount of time in the wild, becoming more skilled in a variety of environments. Friends enjoyed his adventure stories; one even suggested that he write a book. He pursued that idea and soon parlayed his love of the outdoors into an occupation. The results of his efforts are more than 50 books. These include hiking, camping, paddling, and other comprehensive guidebooks, as well as books on true outdoor adventures. Johnny has also written for numerous publications and websites, as well as his local paper, the Johnson City Press. He continues to write and travel extensively to all four corners of the United States, exploring a variety of outdoor activities.