A Planet to Win: Why We Need a Green New Deal by Kate Aronoff 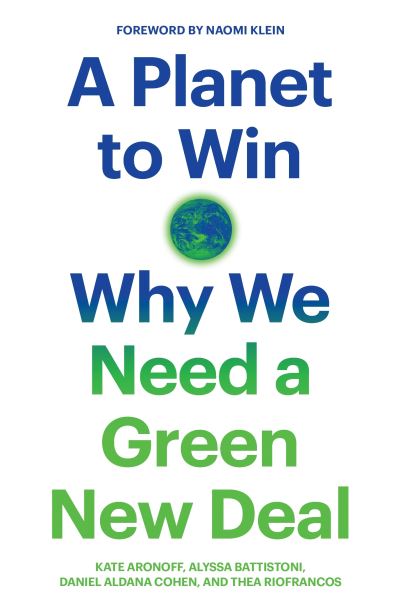 In October 2018, the IPCC published a report warning that the world would warm 1.5 C by 2040 without massive emissions reductions by 2030, with results more devastating than previously imagined. In November, the charismatic democratic socialist Alexandria Ocasio- Cortez won election to Congress. She stated that a Green New Deal would be a top priority. A week later, activists with the Sunrise Movement occupied Nancy Pelosi's office, calling for action on climate in the form of a Green New Deal. Ocasio-Cortez joined them, making global headlines. The Green New Deal is now a buzzword thrown around to signal the need for climate action-but no one quite knows what it means. Winning Back our Future fleshes out what a Green New Deal could look like and draws the connection between climate change and capitalism, arguing that in order to confront one we must confront the other. With concrete proposals, such as ending subsidies for fossil fuel companies and funding a just transition to renewable energy, expanding public housing and transit, and a job guarantee program that emphasizes climate-friendly work, the authors offer a daring set of ideas to confront climate chaos and create a more equitable society. Recognizing that inequality and climate politics are utterly inseparable, Winning Back Our Future draws on the inspiring history of environmental justice movements and sets out a bold framework for the transformative possibilities of a Green New Deal.