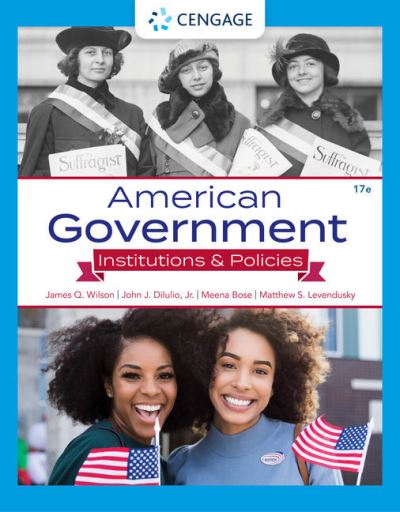 Packed with current examples and practical insight, Wilson/Dilulio/Bose/Levendusky's AMERICAN GOVERNMENT: INSTITUTIONS AND POLICIES, 17th Edition, gives you a clear understanding of the U.S. government -- and your role in it. Highlighting emerging issues in American politics, the authors focus on the importance of governmental institutions, the historical development of governmental procedures and policies, as well as who governs in the U.S. and to what ends. New coverage includes the Trump administration, results of the 2018 and 2020 elections, the nation's response to the COVID-19 crisis, the media's role in promoting political polarization, climate change, the U.S. wealth gap, 21st century wars in Afghanistan and Iraq and more. Numerous features throughout the text help you maximize your study time, while MindTap provides you with a wealth of anywhere, anytime digital learning tools.

About the Author: John J. DiIulio Jr. is a Professor of Political Science at the University of Pennsylvania and has won each of Penn's most prestigious teaching awards. Previously Professor of Politics and Public Affairs at Princeton University, Dr. Dilulio has been a senior fellow and directed research programs at several leading think tanks, including the Brookings Institution. He has been honored with awards from the Association of Public Policy Analysis and Management, the American Political Science Association and other organizations. In addition, he has advised presidential candidates in both parties, served on bipartisan government reform commissions and worked as a senior staff member in the White House. He received his Ph.D. in political science from Harvard University. James Q. Wilson taught at Boston College and Pepperdine University. He was Professor Emeritus of Management and Public Administration at UCLA and, before that, the Shattuck Professor of Government at Harvard University. He wrote more than a dozen books on public policy, bureaucracy and political philosophy. A former president of the American Political Science Association (APSA), Dr. Wilson is the only political scientist to win three of the four lifetime achievement awards presented by the APSA. In 2003, he received the Presidential Medal of Freedom, the nation's highest civilian award. Professor Wilson passed away in March 2012 after battling cancer. His work helped shape the field of political science in the United States. His many years of service to this textbook remain evident on every page and will continue for many editions to come. Meena Bose is Executive Dean for Public Policy and Public Service programs in the Peter S. Kalikow School of Government, Public Policy and International Affairs at Hofstra University. She also directs Hofstra's Peter S. Kalikow Center for the Study of the American Presidency. The author or editor of several volumes in presidency studies and American politics, Dr. Bose teaches courses on the American presidency, presidential leadership and policymaking and American politics. She taught for six years at the United States Military Academy at West Point, and she is a member of the Council on Foreign Relations. She received her Ph.D. from Princeton University and her B.A. from The Pennsylvania State University. Matthew S. Levendusky is Associate Professor of Political Science at the University of Pennsylvania. He obtained his Ph.D. from Stanford University, and his B.A. from The Pennsylvania State University. His research focuses on understanding how institutions and elites influence the political behavior of ordinary citizens, including studies of mass polarization, the effects of partisan media, and various other topics. His work has been honored with a number of awards, including the 2011 Jewell-Lowenberg Award (for the best article published in Legislative Studies Quarterly), the 2013 best paper award from the Journal of Politics, the 2014 Goldsmith Book Prize from Harvard University's Shorenstein Center (for How Partisan Media Polarize America), and the 2016 Erik Erikson Early Career Award from the International Society of Political Psychology.