Beyond a Fringe by Andrew Mitchell - Signed Edition 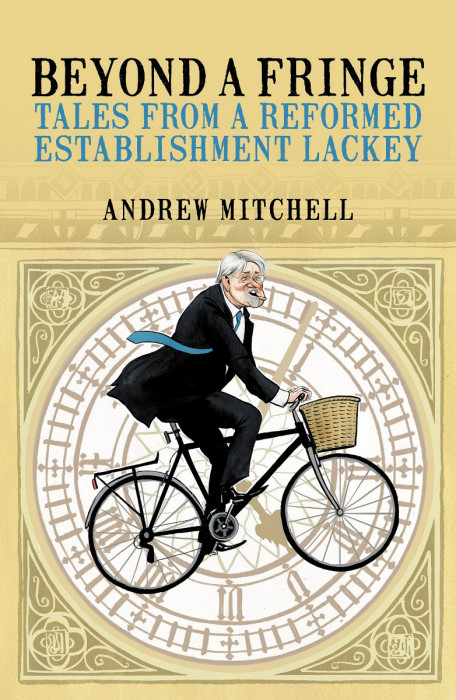 Beyond a Fringe: Tales from a reformed Establishment lackey by Andrew Mitchell - Signed Edition

Veering from the hilarious to the tragic, Andrew Mitchell’s tales from the parliamentary jungle make for one of the most entertaining political memoirs in years.

From his prep school years, straight out of Evelyn Waugh, through the Army to Cambridge, the City of London and the Palace of Westminster, Mitchell has passed through a series of British institutions at a time of furious social and political change – in the process becoming rather more cynical about the British Establishment. Here, he reflects on the perils and pleasures of loyalty, whether to a party, to individuals or to one’s own principles.

He brilliantly lifts the lid on the dark arts of the government Whips’ Office (‘Whipping, like stripping, is best done in private’) and reveals how he accidentally started Boris Johnson’s political career and later naively backed him to be Prime Minister – an act which rebounded on him spectacularly.

Mitchell also writes candidly about the Plebgate fiasco, which led to four police officers being sacked for gross misconduct and in one case imprisoned, while Mitchell himself faced a bill of millions of pounds in legal fees after losing his libel case.

Engagingly honest about his ups and downs in politics, Beyond a Fringe is crammed with hilarious political anecdotes and irresistible insider gossip from the heart of Westminster.

About the Authors: Andrew Mitchell was educated at Rugby and Jesus College, Cambridge. He was an officer in the 1st Royal Tank Regiment, serving with the United Nations military forces in Cyprus. Prior to entering Parliament, he worked for Lazard in London. As the MP for Gedling from 1987 to 1997, he served in John Major’s government, including in the Whips’ Office during the notorious Maastricht debates. Re-elected to the House of Commons for Royal Sutton Coldfield in 2001, he served as Secretary of State for International Development from 2010 to 2012 and as Chief Whip in 2012. He is an active member of the House of Commons and a fierce defender of his constituents. He is also a fellow at Cambridge University, a visiting fellow at Harvard University and an honorary professor at the University of Birmingham. He lives in London and the Midlands with his wife, Sharon, with whom he has two daughters, Hannah and Rosie.

Bookplates are official labels which are signed by the author and then fixed to the title page of the book.