Bombarded: How to Fight Back Against the Online Assault on Democracy by Cyrus Krohn (Hardback) 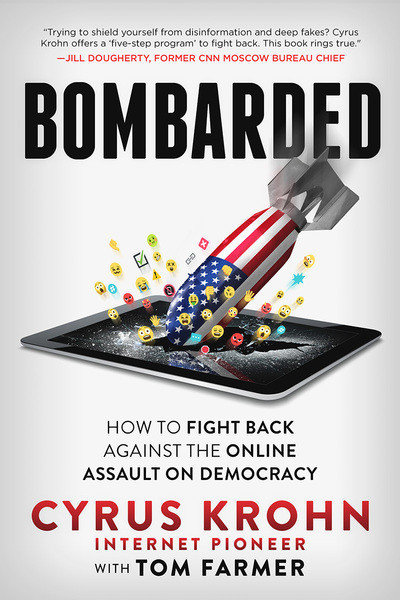 A powerful assessment of how online information became unreliable-and what can be done about it. - Kirkus Reviews Imagine an imminent America where citizens are bombarded with personalized political messages from every smart device - yet information is so suspect, nobody can tell what the truth is. It means oceans of disinformation engineered to sow false beliefs or simply disorient. The coronavirus pandemic provided a foretaste of an infuriating, dystopian future. From the start Americans fought over the most basic facts of the crisis, from death tolls to quack cures to the wisdom of stay-at-home orders. The splintered digital infosphere bred confusion and delusion, some of it fatal. Now think of our campaigns and elections. The digital information age means more than hyper-targeted, just-for-you messages from insurance companies and presidential candidates alike. "Trying to shield yourself from disinformation and deep fakes? Cyrus Krohn offers a 'five-step program' to fight back. This book rings true." -Jill Dougherty, Former CNN Moscow Bureau Chief Big Data is on the way to fueling information environments so fine-tuned, no two of us hold the same view of reality, and no two voters hear the same pitch. Already, citizens don't know who to trust or what to believe - about COVID-19 or anything else. If we ask nothing more of tech providers or digital citizens, the fog will continue to thicken. Irritation will merge into despair and then numbness... and democracy teeters.Digital pioneer Cyrus Krohn knows the territory, and in Bombarded: How to Fight Back Against the Online Assault on Democracy, Krohn locates the roots of our blooming political chaos in the earliest days of the World Wide Web. But he goes beyond recounting 25 years of destabilizing Internet shock waves and his own role in building digital culture. Krohn rolls out a provocative action plan for rescuing the American system of campaigns and elections while there is still time.

About the Author: Since the dawn of the digital era Cyrus Krohn has been recognized as a front-line digital innovator -- a publisher, political strategist, entrepreneur, and commentator focused on the fate of our fragile American democracy amid unprecedented technological upheaval. From his early days launching Slate.com, where he helped frame the digital information culture in ways that still reverberate today, to his current role advising Democracy Live, the largest US provider of cloud and tablet-based voting technologies, Krohn has labored to make our exploding tech toolset propel better outcomes for society. Business Insider named Krohn one of the Top 50 US digital political strategists, and he has advised organizations internationally including in Malaysia, Costa Rica, and France. Krohn launched his career at an intern in the first Bush White House in the office of Vice President Dan Quayle. He worked in the CNN Washington bureau producing programs including Larry King Live and Crossfire. He led digital political projects for Microsoft and Yahoo and managed digital campaigns at federal, state and local levels, including during the 2008 presidential election between John McCain and Barack Obama. Krohn edited The Slate Diaries, published by PublicAffairs Books, with best-selling authors Michael Kinsley and Jodi Kantor. Krohn has lectured on the Internet's impact on democratic systems at the Personal Democracy Forum, Georgetown University, The Aspen Institute, Harvard, and MIT. He served on the Board of Advisors of the George Washington University Institute for Politics, Democracy and the Internet and the E-Voter Institute. Krohn graduated from the University of Lynchburg. Veteran writer and communications strategist Tom Farmer is a former CNN executive producer and winner of Peabody, Telly, Cicero Speechwriting, and CableACE awards. He produces thought leadership initiatives with eminent figures in technology, cybersecurity, finance, higher education, and philanthropy. Tom's consultancy, Brick Duck Communications, is based in Chicago.