Brothers in Arms by James Holland 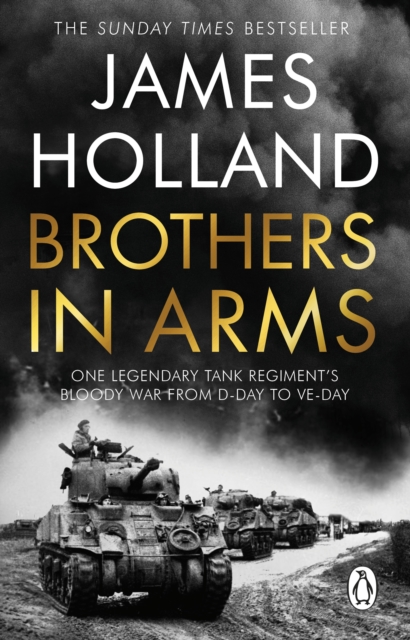 It took a certain type of courage to serve in a tank in World War Two. Encased in steel, surrounded by highly explosive shells, a big and slow-moving target, every crew member was utterly vulnerable to enemy attack from all sides. Living - and dying - in a tank was a brutal way to fight a war.

The Sherwood Rangers were one of the great tank regiments. They had learned their trade the hard way, under the burning sun of North Africa, on the battlefields of El Alamein and Alam el Halfa. By the time they landed on Gold Beach on D-Day, they were toughened by experience and ready for combat. From that moment on, the Sherwood Rangers were in the thick of the action til the war's end. They and their Sherman tanks covered thousands of miles and endured some of the fiercest fighting in Western Europe. The first British unit to cross into Germany, their engagements stretch from the Normandy beaches, to the bridges at Eindhoven, and the grinding crossing of the Siegfried Line and on into the Nazi heartland.

Through compelling eye-witness testimony and James Holland's expert analysis of the war in the West, Brothers In Arms brings to vivid life the final bloody scramble across Europe and gives the most powerful account to date of what it was really like to fight in the dying days of World War Two.

About the Author: James Holland is a historian, writer and broadcaster. The author of a number of bestselling histories, including Battle of Britain, Dam Busters, Normandy '44 and, most recently, Sicily '43, he has also written nine works of historical fiction, including the Jack Tanner novels. He is currently writing an acclaimed three-volume new history of the Second World War, The War in the West. He has presented - and written - a large number of television programmes and series for the BBC, Channel 4, National Geographic, and the History and Discovery channels. A three-part documentary series based on his bestselling book Normandy '44 under the same title can be found on Amazon Prime. James is co-founder of the Chalke Valley History Festival and of WarGen.org, an online Second World War resource site, and presents the Chalke Valley History Hit podcast. He also presents We Have Ways of Making You Talk, a podcast with Al Murray in which they discuss the Second World War. A fellow of the Royal Historical Society, he can be found on Twitter and Instagram as @James1940.