Christian Paths to Health and Wellness by Peter Walters

Christian Paths to Health and Wellness, Third Edition, is a faith-based text that helps students explore and apply key concepts of holistic health and wellness. A new web study guide assists students in retaining and using what they learn. 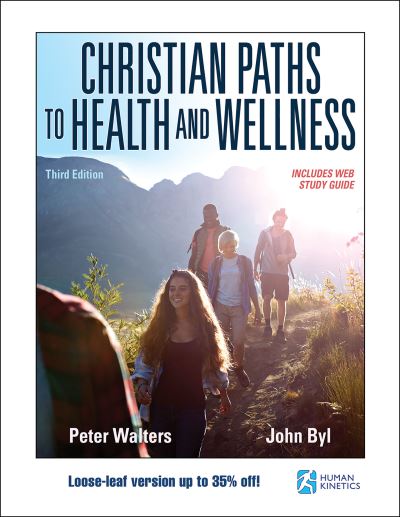 About the Author: Peter Walters, PhD, holds a doctorate in kinesiology and a master of science degree in physical education from Texas A&M University. He is a professor in the department of applied health science at Wheaton College, an interdenominational Christian college in Illinois. Since 1996, when he became director of the wellness program at the university level, he has evaluated the health and wellness behavior of more than 7,500 college students. He has taught health and wellness courses for more than two decades. Before his career in academics, Walters was actively involved in several parachurch organizations, including Campus Crusade for Christ, the Navigators, and the Fellowship of Christian Athletes. In addition to these ministry opportunities, he served as director of student ministries in three churches. Walters' current and past certifications are from the American Council on Exercise, National Strength and Conditioning Association, USA Olympic Weightlifting, and CrossFit. He has used his expertise to win significant national and international competitions for powerlifters, bodybuilders, and triathletes. Dr. Walters presented and published his wellness research at several national conferences and in peer-reviewed journals. In 2009, he received the Literary Award from the Christian Society for Kinesiology, Leisure, and Sport Studies (CSKLS) and subsequently served as president of that national organization. In his spare time, Walters enjoys adventure trips, which have brought him to the summits of Mount Rainier and Mount Kilimanjaro. He resides in Wheaton, Illinois. John Byl, PhD, is a professor emeritus of physical education at Redeemer University College in Ancaster, Ontario, Canada, where he taught wellness courses. Byl is currently the Canadian educational consultant for Gopher Sport. Byl has been a professor since 1986 and has edited, authored, or coauthored 20 books, including Physical Education, Sports, and Wellness: Looking to God as We Look at Ourselves. He is a recipient of the Christian Society for Kinesiology, Leisure, and Sport Studies (CSKLS) Presidential Award, which recognizes those who have displayed actions compatible with the mission of the CSKLS. In 2013, Byl was awarded Canada's Queen Elizabeth II Diamond Jubilee Medal for his significant contribution to making physical activity a priority within his community and within the country.