The practice of British painter Greg Rook (b.1971, London) revolves around those who seek to start a new life or wish to lead alternative lifestyles. 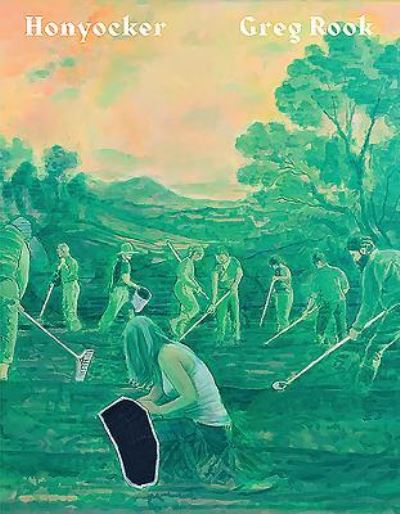 The practice of Chelsea School of Art and Goldsmiths College graduate Greg Rook (b.1971, London) explores the rich visual history, curious cultural politics and often complex ideologies of those who seek to start a new life or wish to lead alternative lifestyles. From pioneers travelling to new continents to those wanting to stay put and live self-sufficiently, Rook invites us to join him on his own aesthetic and critical journey through a world of colonies, communities, communes and cults. By means of figurative painting that pushes the boundaries between realism and lyricism, Rook captures something profoundly revealing in terms of the hopes, dreams and successes as well as the disappointments, disillusionment and disasters that radical departures from home life and mainstream society can entail. For some, utopias can turn to dystopias, the Romantic imaginary can turn to tragedy, the sublime can turn to misery. For those fleeing oppression, however, it can be completely the opposite - newfound freedom, affluence and happiness. Rook's oeuvre, which incorporates cowboys and communists, agrarians and anarchists, believers and book-burners, depicts how the relationship between people and land is regularly fraught with issues, especially when migration and a clash of mindsets or ways of life is involved. What are brave new worlds for some are threatened old worlds for others... This hardback publication, the first monograph to be devoted to the work of Greg Rook, has been co-published by Vento& Associati and Anomie to coincide with a substantial mid-career survey exhibition of the artist's work being staged by Vento & Associati at the Fabbrica del Vapore in Milan in spring 2019. Featuring approximately fifty illustrations of paintings and works on paper made by Rook since 2006, along with an introduction by London and Milan-based critic and curator Michele Robecchi and a significant newly commissioned essay by Matt Price, a leading voice in the field of contemporary British painting, the publication offers an engaging and pertinent commentary on Rook's long-standing painterly investigation into how people choose to live their lives. Vento& Associati is a Milan-based company operating in global contexts that specializes in strategic cultural communication within fields such as public affairs, corporate and social responsibility, and cultural fundraising. Vento & Associati manages a programme of exhibitions at the Fabbrica del Vapore as part of the Spazi al Talento initiative of the City of Milan.

About the Author: Greg Rook is an artist working in London and Surrey. He graduated with a BA from Chelsea School of Art in 2000, before completing an MA in Fine Art at Goldsmiths College, University of London, in 2002. Since then he has held over a dozen solo exhibitions and featured in more than forty group exhibitions in Britain and internationally. Andrea Vento is CEO of Vento & Associati, a Milan-based company operating in global contexts that specializes in strategic cultural communication within fields such as public affairs, CSR and cultural fundraising. V&A manages a programme of exhibitions at the Fabbrica del Vapore as part of the Spazi al Talento initiative of the City of Milan. Michele Robecchi is an editor, curator and writer based in London and Milan. A former editor-in-chief of Flash Art, Milan, and Contemporary Magazine, London, he was London editor of Mousse magazine, Milan, until 2018. Since 2012 he is commissioning editor of Phaidon's acclaimed Contemporary Artists Series. Matt Price is an independent curator, writer and editor working in Yorkshire and London.