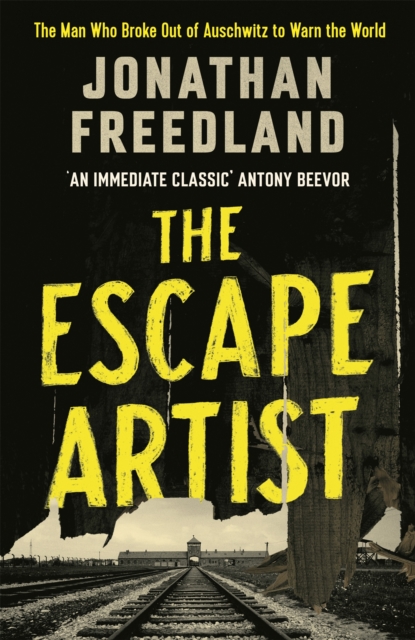 In April 1944 nineteen-year-old Rudolf Vrba and fellow inmate Fred Wetzler became the first Jews ever to break out of Auschwitz. Under electrified fences and past armed watchtowers, evading thousands of SS men and slavering dogs, they trekked across marshlands, mountains and rivers to freedom. Vrba’s mission: to reveal to the world the truth of the Holocaust.

In the death factory of Auschwitz, Vrba had become an eyewitness to almost every chilling stage of the Nazis’ process of industrialised murder. The more he saw, the more determined he became to warn the Jews of Europe what fate awaited them. A brilliant student of science and mathematics, he committed each detail to memory, risking everything to collect the first data of the Final Solution. After his escape, that information would form a priceless thirty-two-page report that would reach Roosevelt, Churchill and the pope and eventually save over 200,000 lives.

But the escape from Auschwitz was not his last. After the war, he kept running – from his past, from his home country, from his adopted country, even from his own name. Few knew of the truly extraordinary deed he had done.

Now, at last, Rudolf Vrba’s heroism can be known – and he can take his place alongside those whose stories define history’s darkest chapter.

About the Author: Jonathan Freedland is a Guardian columnist and former foreign correspondent. He was named Columnist of the Year in 2002, Commentator of the Year in 2016 and won an Orwell Prize for Journalism in 2014. He is the presenter of BBC Radio 4’s contemporary history series, The Long View, and is a regular contributor to the New York Review of Books. He is the author of 11 books, two of them non-fiction, including his first book, the award-winning Bring Home the Revolution. He has written nine thrillers under the name Sam Bourne, including The Righteous Men which was a #1 Sunday Times bestseller and has sold over 2 million copies worldwide.