The Seven Ages of Death: A Forensic Pathologist's Journey Through Life by Dr Richard Shepherd 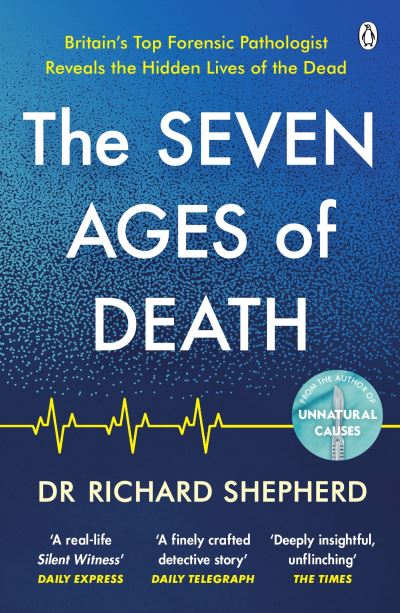 'This book is about death, but in it I will take readers on a journey through life . . .' Dr Richard Shepherd, Britain's top forensic pathologist, has spent a lifetime close to the dead.

As a medical detective, each autopsy he carries out is its own unique investigation, uncovering the secrets not only of how a person died, but also of how, through every stage of life, the risks to each of us ebb and flow. Through twenty-four of his most intriguing, enlightening and never-before-told cases, Dr Shepherd shares autopsies that span the seven ages of human existence, and have taught him as much about the marvels of life as the inevitability of death.

From old to young, from murder to misadventure, and from illness to accidental death, each of these bodies has something to reveal: about human development, about mortality, about its owner's life story, about justice and even about Shepherd himself. From the bestselling author of Unnatural Causes comes a powerful, moving and above all reassuring book about death as it touches our own lives - how to understand it, how best to postpone it, and, when our time comes (as it must), how to embrace it as the last great adventure.

'An absolutely brilliant book. I really recommend it, I don't often say that but it's fascinating' Jeremy Vine, BBC Radio 2

About the Author: Richard Shepherd was born in West London but grew up in Watford. He was introduced to a medical textbook smuggled into the classroom by a friend which opened his eyes to the world of crime and murder, setting him on a lifelong quest to understand death in its many forms. He trained as a doctor at St George's Hospital medical school at Hyde Park Corner, qualifying in 1977 and then completed his postgraduate training as a forensic pathologist in 1987. He immediately joined what was then the elite forensic department at Guy's Hospital. He has been involved nationally and internationally in the forensic investigation of thousands of deaths from unnatural causes, from headline-making murders to mass natural disasters.